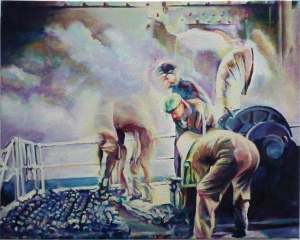 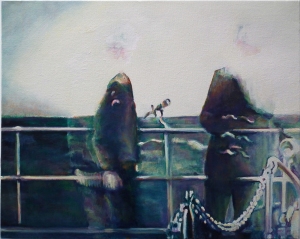 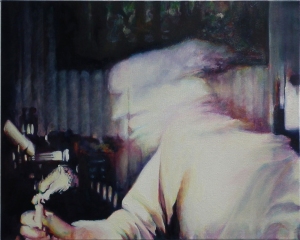 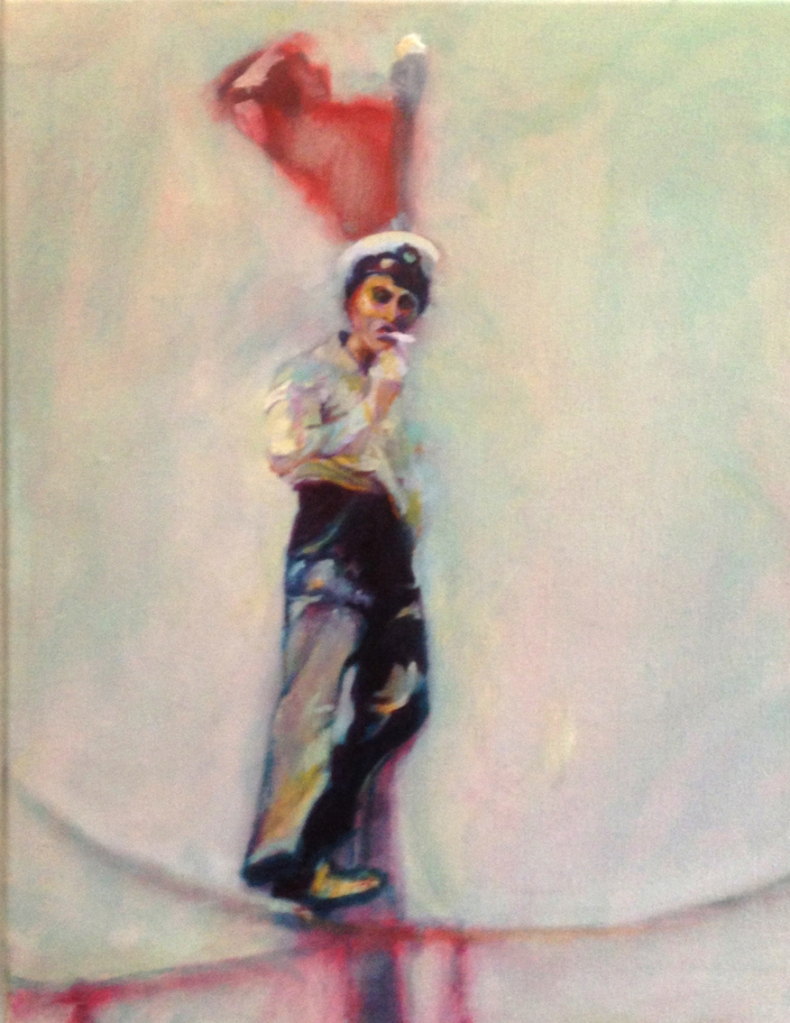 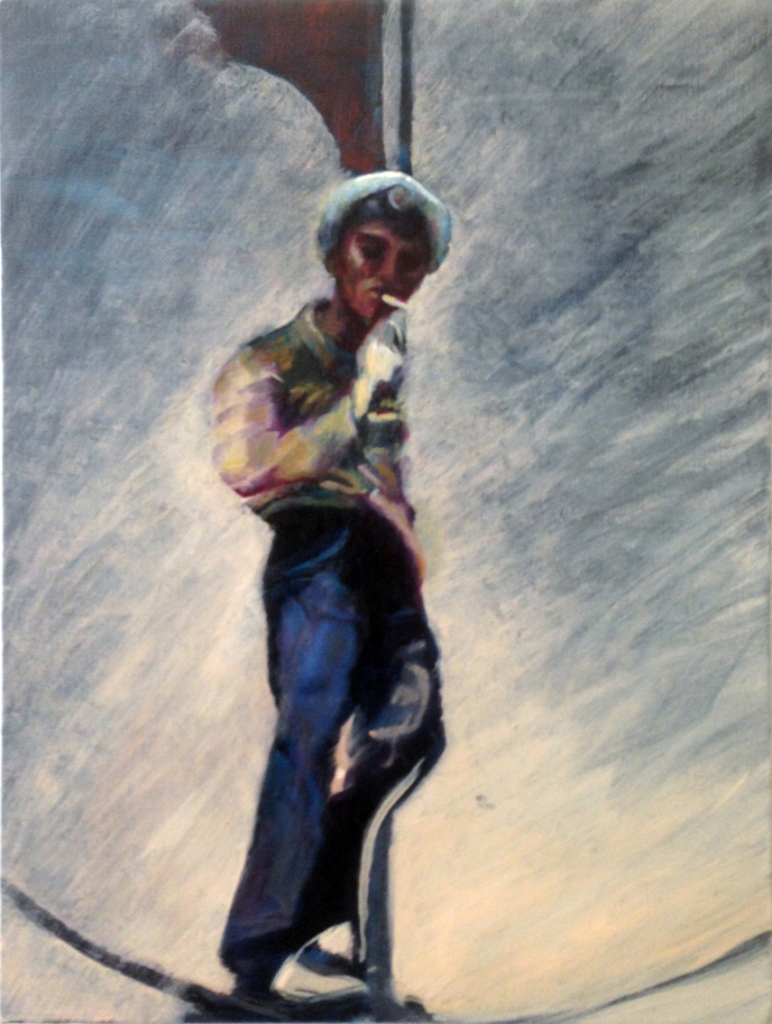 Essay: An encounter with the opaque, by Judith Tucker.

It is not the style of designation that matters: it is the affirmation, implicit and explicit, in poetry, in art…of the agonistic-collaborative presence of agencies beyond the governance or conceptual grasp of the craftsman…a metaphysical act, an encounter with the opaque and precedent authority of presence.

Leaving the sharp, blue, brightness of East London February light, stepping onto a rough, concrete studio floor, surrounded by familiar piles of oil paints, I peer at some small canvases on the wall, allowing the smudges, smears and layers of paint to coalescence gradually into half-formed figures and faces. They seem to emerge blurred, shadowy, engaged in uncertain activity. Are they caught somehow mid-action, or have they completed whatever it is they are doing? Out of the corner of my eye I catch the flicker of a computer screen in action and turn to listen more carefully to rather eerie, muzzy, somewhat indecipherable sounds, to watch colours moving on the screen as slowly, so slowly, the figures emerge – and then to the piles of prints –smooth, shiny black and white, grids overlay pairs of images, resonant of x-rays.  As my eyes watch, my mind engages and eras merge and flicker to and fro. How to make connections to another experience of looking at a series of paintings I viewed some years ago? Then I stood immersed in a curved gallery space: absorbing the silvery shimmer and fluctuating space of large, amorphous, abutting paintings. I recall the contradiction of the push and pull of surface and orientation; I recall trying to uncover how they had been made. Here I am in Anne Robinson’s studio looking at her work, reminded of my own studio, whilst simultaneously thinking about Michael Evans’ paintings, and through this contemplating those old chestnuts: time, space and memory.

To place those two artists together in one gallery space is daring; to put small-scale figural pieces against larger-scale abstraction could be risky. The sheer physical presence of Evans’ almost monochrome paintings and their economy of form, the focus on process, contrasts with the very dense surfaces, the figuration, the evident facture and implication of narrative in Robinson’s. Yet, since both artists work between moving and still imagery, between fleeting digital images and the stubborn materiality of paint, this danger is ameliorated. At first glance this work might reflect what Rosalind Krauss describes as the “post-medium condition” of contemporary art. However, painting is the central medium and primary concern of these two artists. It is through thinking in a painterly way through the electronic images, both moving and still, and through viewing these in juxtaposition with the corporeality of a painted surface that this work opens up some of the possibilities available in and for painting now. All paintings are made through applying physical layers onto a surface and the accretive layering inherent in digital imagery reflects, informs and contrasts with those in painting. Here we have paintings that know of photography; video; film and moving image work, that are informed by a long standing painting practice. Robinson’s canvases are evidently derived from film and photographic sources and the surfaces of her digital prints and films look like paintings, are almost painterly.  Her practice moves to and fro between painting and digital video work and aspects of each process influence the other. Evans’ recent oeuvre also explicitly employs technology: groups of paintings are reconfigured and combined using computer software and this, in turn, informs the painting. The layers in Evans’ paintings might suggest form but they remain elusive. What is figure and what is ground is ambiguous. Painted marks and surfaces that might initially appear solid seems to melt and opens up as space.

When the two artists’ works are in each other’s company, then, they invite questions about what occurs for the viewer between the physical and the virtual, between the apparent stillness of the paintings and movement of the digital film. This exhibition invites us to consider time: duration, recollection and actuality, then and now, the present moment. It does this in part through this combination and conflation of stillness and movement.  Robinson is overt in her focus on small moments in time, re-filming, re-visiting, unraveling and exploring those moments in forensic detail. Time is tackled more obliquely in Evans. Both artists eschew the fantasy of pure expressivity of an artist in his or her studio, and both employ certain distancing techniques that defamiliarise and unsettle us. This destabilisation and uncertainty is reflected in our experience as embodied viewers, and though this sort of off-balance encounter, we become aware of the organic intertwining of vision and touch, thinking, feeling and looking. Robinson explicitly considers how the very act of painting might alter a painter’s state of consciousness and speculates as to how their perception might alter as they continue painting. She invites us to engage with the physical action of matter in the painterly surface in terms of this altered sense of time, her paintings “move” in more than one sense. She draws parallels with this and how our perception of time might be distorted when viewing film or moving image. Evans’ process-driven paintings are initiated through a detached method of pouring paint. While he is interested in the alchemy and the very materiality of paint he is also concerned, counter-intuitively, with tackling head on the unfashionable notion of the transcendental impulse.

Thus, between them, these two artists’ works invite questions, not only about painting in a digital age, but also about our sensory perceptions of time. Furthermore, and more awkwardly, their works invites questions about how we might deal with the embarrassment of feeling, emotion and spirituality in contemporary art, in particular painting. What emerges from both artists’ work – figural and abstract together – is a paradoxical shared concern to make visible what is not visible, bringing into play uncertainty, doubt and hesitancy. Both begin with questions about the meaning of the apparent simplicity of applying paint to canvas in a studio and end with the complexity of time and space within a gallery space. But what stops this work being unbearably earnest is precisely what is out of the control, what is beyond intention: the sensuous, viscous quality of paint, the sumptuous slow motion of the moving image work, the seductive surfaces of the digital prints: the sheer pleasure to be had in the viewing of it all, it is all here in the encounter with the opaque, here, now, in this present moment.