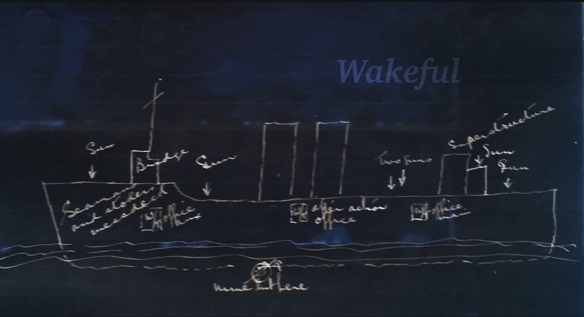 Wakeful  is screening  Whitechapel Gallery on the evening of Thursday January 23rd 2020 at 7.00pm along with two works by wonderful filmmaker Mairéad McLean: A Line Was Drawn (2019, 14min), exploring how our world is structured through the creation of borders and boundaries limiting movement, thinking, questioning and agency; and No More (2013, 16 mins) considering the introduction of internment without trial in Northern Ireland in 1971, which won the inaugural MAC International Art Prizeand Anne will be in conversation with poet and critic Cherry Smyth.

lease note this is a ticketed event – booking details on link above. This screening is part of f Not Just Me but You Too: Cinemas of Sisterhood, April 2019 – April 2020, a year-long season of films, entirely by women and gender non-binary filmmakers.

Wakeful  also has a screening event at CCA Glasgow on the evening of Friday 7th February.

This event is free, but booking advised. 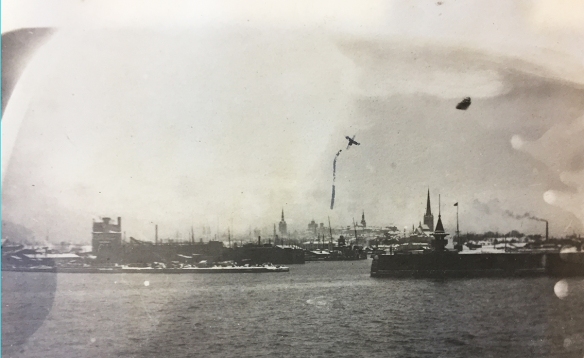 The screenings of Wakeful include an event on ‘armistice’ day, 2018 , the centrnary of the ‘end of war’  with live score at Cafe Oto by percussionist Limpe Fuchs.

As I wrote the last sections of voice over for the film,  the UK decides to send hundreds of troops back in to the ‘stalemate’ of Afghanistan to ‘match’ the 4000 sent by America. There are wars in Iraq, Palestine, Syria. Myanmar, Darfur, Yemen, Ukraine, Kashmir and some fifty other countries with more than 11,000 estimated deaths through conflict within the past year.

According to the campaign against the arms trade: this ‘..trade is dominated by the five permanent members of the UN Security Council: China, France, Russia, UK and the US, along with Germany and, increasingly, Israel. The permanent members alone account for around three quarters of exported arms.’

Thrashing in the Static is a ‘song–film’ made on the Thames foreshore in response to long-distance, telegraphic communication, and disorienteering and concerning the story of Alf, my half-brother, a young sailor, who was ‘lost at sea’ and remains stranded on a small island iin 1942. Can the technical operations of a ‘sorcerer’s cinema’ and the uncanny nature of painting and erasure derange our senses and create magical, relations to space-time, allowing us to traverse time-zones and cross the bounds of one temporally imprisoned human life? Filming, editing and song by Anne Robinson and featuring  performance by Rachel Gomme. (2014, running time: 19mins. sound).

Thrashing in the Static is showing along with the painting series Skinny White Sailor in phase two of ‘Ghost on the Wire’ at Singapore’s exciting and innovative art and film space: Objectifs in August. More news to follow

And has also been shown at:

Congratulations to artist Sarah Sparkes! winner of the ‘Meru Art-Science Award for her film Time You Need. Very pleased to have worked on this as editor and on post-production effects! Showing at: GAMeC  (Gallery d’Arte Moderna e Contemporanea) as part of the 13th Bergamo Science Festival.

The Result of This Deception, 2013

The Result Of This Deception is a song-film, a lost voice paradoxically offering comfort and a light to light your way in the dark winter’s night… concerned with time travel, with ‘remembered songs’ as a kind of psychic architecture and with the voice as spirit presence. It uses a deconstruction of the song Whenever I Feel Afraid on the soundtrack and has been adapted to form a site specific piece for Lumen in the old St Clements psychiatric hospital and former Victorian workhouse – playing in the strange, empty space of the records cupboard below stairs. In this piece, moments in time are expanded or contracted through sonic and cinematic devices, creating a kind of expanded, other-worldly temporality. (20min on loop with sound)

The Inside Out Blues makes a sound thread for a film. The voice is on the inside coming out.  Surrealist Antonin Artaud’s last work To Have Done With the Judgement of God, written for radio in France in 1947, worked with the extremes of unsettling ‘mad’ noises, shouts, cries and glossolalia. Artaud particularly wanted workers, people working with their hands and bodies, perhaps those most imprisoned in the body, to hear his work. Scheduled to air early in 1948, it was pulled from the broadcasting schedule at the last minute, intentional hegemonic repression, still visible in the gross gentrifying of Marseilles as ‘capital of capital’. On the edge of fortress Europe, the voice can cross borders in frenzied dance that soars over the razor wires of the rich and dives /’divers’ under the sea. ‘chantier: acces interdit’ become ‘à chanter pour la liberté’… across the laws and borders made to keep people out, to let the outside-in…  ‘Acces Interdit’, you are being filmed.. Inside Out Blues was made as part of a residency with Counterproductions and DeCenter Der Space in Marseilles, 2013 and first screened at CGP, London in October 2013. (20mins with sound) video link

‘Is it You?’ is a two-screen video piece made by Anne Robinson as part of a body of work about temporality and affect, experimenting with the use of high speed filming and long exposures to capture the same moments of time passing.This piece is a kind of ‘ghost dance’ working with rhythmic patterns made in response to the spectral traces of remembered songs, including Toots and the Maytalls track Pressure Drop, re-presenting them out of time in dissociated rhythms. Seeing is ‘strange’. First shown as part of PhD Exhibition at CASS, 2012. (17mins. with sound) video link

Que Sera is a two-screen photo/video installation work,  first shown Correspondence:  a Facility supported group exhibition at Libeskind Graduate Centre, June 2010. The song, a perfect, recognisable form, is deconstructed using varied cinematic devices, frame-rate and exposures to catch the same moments in time passing and juxtapose these for the perceiver. Passing moments expand or contract, catching the spectator in perceptually unsettling circuits of rhythm. Que Sera emerged, in part, from a persistent memory of a particular song: a kind of haptic and visual sense memory, something in the periphery of my receptive field which was there along with my immersion in thinking about  temporality in art . The song Que Sera (Evans/Livingston 1956), is best known in its interpretation by Doris Day in the 1950s  and one of my earliest memories is of my mother singing this to me. First shown as part of PhD Exhibition at CASS, 2012. (18min. with sound) video link 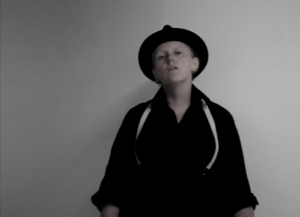 So Long is a singing performance devised for the show Performance and Documentation, curated by Stephanie Dickinson in 2013. The work combines a performance in the space, holding notes for the maximum possible duration with high speed filmed documentation and experimental drawn documentation. First shown at East Street Arts Showspace, London, 2013. video link

In Alive Alive-O, a remembered song reinhabits the strange and magical shape of an empty ruined boat, as an invocation. The film was shot in inside the hull of an 1895 lugger being restored in Penzance where my dad, also born in 1895, grew up. I have memories of him singing this song,  Molly Malone, the haunted presence in the boat space. The soundtrack was made in collaboration with musician David Cross, formerly of King Crimson. (10 miins. B/W, with sound) video link

Roaring Girl was made for a project in 2012, working with the Comm(o)nist Gallery at East Street Arts in Leeds. The film is intended as part of a performance which features the song  ‘Buddy Can You Spare A Dime?’ being sung live along with the projection – an invocation of past souls defeated by capital, making a psychic architecture out of a ‘remembered song’… First screened/preformed at The Common-all Games at East Street Arts, 2012.  Also performed on board MS Stubniz for Exploding Cinema  in 2013. (12mins. with sound and live performance) video link

The Song of the Skiver was made for an exhibition with the Comm(o)nist Gallery at The Toilet Gallery in Kingston in 2011. It was devised as an installattion, set up with a cctv camera positioned above a toilet cubicle door, pointing down into the cubicle to record any activity inside and relay it to the screen on the outside of the door. People are invited to come inside and skive in whatever way they feel moved to. From time to time the film is showing and the soundtrack runs continuously.  Inspired, in part by the moment in 1936 Charlie Chaplin film Modern Times  where Charlie ‘skives’ off to the toilet for a fly cigarette only to be ordered back to work by his boss materialising on a film screen, this is a song for artists seeking to resist the commodification machine of the art world and to make work in real freedom and for all workers who don’t want to wind up with physical, mental or spiritual convulsing limbs fit only for the conveyor belt. (gallery version 12mins, short film version 1min. with sound) video link 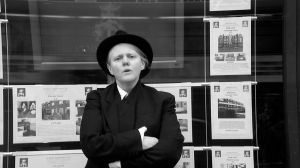 Made for CGTV, this is a one-minute film about land, property and wealth… (1min. with sound) video link 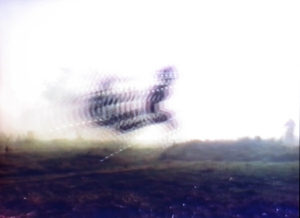 All at once a mighty herd they saw, slipping and sliding across the screen and in and out of consciousness.. riding on forever through time and space… Made for the 2014 Chinese Open in Soho, in the ‘year of the horse’.  (15 mins. on loop, with sound)

Made for a Feminism and Subjectivity Research event at University of the Arts, Chelsea, in response to Gertrude Stein’s Tender Buttons,  this work picks up on a description of a film never made and imagines ‘a meeting of two artistic mysteries’ – a found footage where Stein might just be portrayed by Margaret Rutherford.  (5mins. with sound)

A manually selected live jukebox featuring feminist favourites with an element of chance… This performance was originally devised as part of Rachael House’s Feminist Disco at Camberwell School of Art in 2011. The image here shows another incarnation of the work at Supernormal  Festival in 2013 with Rachael’s ‘To be Normal..’ banner in the background and a version has also been performed as part of Grave Passions curated by NIcky Hodge in 2012.

A manual selection juke box: ‘to operate, select a song from the hat and write the title on the blackboard…’ A performance in which which fragments of protest songs, ingrained in heart and memory are performed live to an individual listener. Originally devised for Manual, with the Frisk collective and performed at The Others,  London in 2011. Other venues have included Brixton Market, Camberwell Green and The University of Leeds during PSI in 2012.